Sisterhood truly is the most potent, inspiring and exasperating relationship: where grievous bodily harm can magically turn into profound silliness, which can turn into deceptive and mysterious thefts of anything from books and clothes to biscuits, which can turn into profound existential bonding conversations about love, life and the Real Housewives (substitute RH with your mutual sisterly trash). Jane Austen knew it with Pride and Prejudice and Sense and Sensibility; Louisa May Alcott knew it with Little Women; Phoebe Waller-Bridge knew it with Fleabag; and Deniz Gamze Ergüven absolutely knew it with Mustang. I re-watched Mustang a couple of weeks ago and it is still one of the most compelling and emotionally charged films about sisterhood I have come across.

The plot revolves around five sisters: Sonay, Selma, Ece, Nur and Lale, and told largely through the point of view of Lale, the youngest. The sisters live with their ultra-conservative grandmother and uncle in a small village in northern Turkey. One day, after Lale tearfully says goodbye to her teacher who is moving to Istanbul, the sisters go to the beach with some male friends and play in the water. They are spotted and reported to their guardians, who effectively turn their house into a prison and arrange marriages for the girls. It is at times devastating, brilliantly funny and an incitement to free spiritedness in all teenage girls, especially when confronted with the deepest and darkest patriarchal forces.

And those patriarchal forces are well and truly horrifying. One of the scenes seared into my memory is at the wedding, where the girls’ uncle, Erol, who has proven himself to be aggressive and violent not only with the girls but with their grandmother (his mother), stands drunkenly and happily in the middle of the dancefloor, eyes closed, firing his gun into the air. Where the girls had at first been dancing, they cower around him, clamping their hands to their ears as he shoots and shoots. When I first watched the film, I thought to myself ‘Why on earth is he happy? Why is he celebrating?’ He cares nothing for the girls beyond keeping their virginity intact and, with hideous irony, it is heavily suggested that he sexually abuses two of them. Maybe he is just happy that they are no longer his responsibility and that he’d fulfilled some kind of patriarchal role in getting them married off? I think this is part of the way there: in this scene, ultimately, Erol is relishing his power. He is the one with his hand on the trigger, asserting and revelling in his dominance over the lives and fortunes of his nieces. It is sickening and infuriating to watch.

Additionally, watching Lale learn how to drive holds such urgency and pathos. Selma tells her that she was unable to escape because she couldn’t drive and Lale refuses for that to become her reality too. She tries and fails and tries again to learn how to drive, enlisting the help of truck driver Yassin, even though she is easily only 11 or 12 years old. Driving is a right we so take for granted in the UK, but is a fundamentally powerful means of power and control in religious and conservative countries. The importance of women being allowed to drive in countries like Saudi Arabia is all the more pertinent after watching a film like Mustang.

Amongst the hellish religious conservatism that the film actively exposes and challenges, we see the enduring and undimming power and pleasures of sisterhood, in all its multi-faceted manifestations. Indeed, the gentle intermingling of relatively light-hearted sisterly dramas with the devastating cultural power dynamics is what makes this film at once irreverent and tragic. We see the sisters defending one another from beatings; breaking out of the house to attend a women-only football match, then gossiping and messing around in their bedroom. One sister tells of how she radically subverts the injustice and intrusion of virginity tests by partaking in anal sex to prevent ‘losing her virginity’, before later on warning another sister that she’ll rip her head off if she steals her clothes again. As such, the film perfectly balances the magically mundane sisterly qualms and quarrels with the bigger, scarier patriarchal violence that determines their freedom and their happiness.

In this, I think the film goes a step further than Jeffrey Eugenides and Sofia Coppola’s The Virgin Suicides: the Lisbon sisters are only ever a mystical figment of the young boys’ suburban imagination, never fully realised as ostensible young women with desires, quirks, tempers or interests, Lux being, perhaps, the exception. Mustang shows that coursing underneath all of the patriarchal violence, double standards and unfairness of being a young woman living under religious conservatism, is the understanding, camaraderie and mutual struggle of being a girl and having female siblings. It is both heart-warming and heart-wrenching and speaks to anyone who has had a sister who has driven them absolutely mad but who will stand shoulder-to-shoulder with them through whatever chaos comes their way, patriarchal or otherwise. 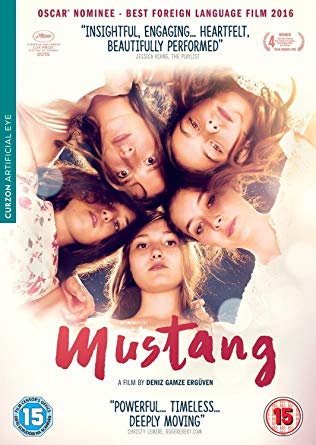